I was never served beets as a child, perhaps because it was one of the few foods my father refused to eat. Even as an adult, I am reluctant to eat beets; perhaps because they look so much like cranberry sauce, which is a favorite of mine, but their taste and texture is very different.  I like this recipe for Roasted Beets ‘n’ Sweets from Allrecipes for a number of reasons.  Not only does it make good use of this seasonal vegetable, and contains all of the beautiful purple and orange colors of autumn, but it also includes that  that superfood, Sweet Potatoes.  This recipe is also very versatile–it can be used to top a salad or makes a great side dish to serve at Thanksgiving. Stop by Colchester Neighborhood Farm today and pick up some freshly harvested beets.

Here is a great recipe that uses many of the fall veggies that are being harvested right now and combines them into a dish that is both healthy and delicious. This salad from Good Housekeeping uses some of those “super foods” (think avocado) that are being touted as the secret to good health and a slim waistline.  And because the dressing is home made and free of any the preservatives you find in the ones sold in grocery stores, this salad is perfect for serving for lunch or even a light supper.

Beets are one of those vegetables that may not have the prestige and popularity of green beans or even potatoes but these purple root vegetables should not be underestimated. Packing so much nutritional value as well as some ancillary benefits that are sure to boost your life in a number of ways, beets deserve a spot right next to sweet potatoes and avocados on the list of today’s popular “superfoods.”  From lowering blood pressure to boosting your mood, beets are one of those vegetables that, if you haven’t incorporated them into your diet, it might be a good idea to find a place for them at your dinner table. Here are just a few of the nutritional benefits and some other advantages of eating beets.

There’s no denying that there are plenty of nutritional and other advantages to eating beets. This week, Colchester Neighborhood Farm is packing this root vegetable into its CSA shares. Stop by the farm and pick up a few organically grown, freshly harvested beets…it could be just the pick me up you are looking for. Tell us your favorite recipe for cooking up beets.

Buying fresh fruits and vegetables from a local farm stand not only demonstrates healthy eating habits to children, it can teach them the value of supporting local agriculture. If we’re lucky, the trip to the farm can result in a few cherished memories. There is no denying that tomatoes or lettuce picked the same day  taste better than the produce purchased from the grocery store. If you’ve ever had the pleasure of harvesting food from a backyard garden rather than a refrigerator, you will agree that the “chore” itself could be as fun as the food was tasty. I remember picking vegetables with my grandfather; he taught me how to choose the ripest and sweetest tomatoes and how to determine when peppers were ready to be picked. Even sweeter than those tomatoes are the memories of the experience that I still carry with me today.

By today’s standards, however, we are not always as diligent about taking time to smell the roses…or as the case may be, the basil. In our rush to complete all of our errands, making a special trip to a local farm, exclusively for the purpose of buying cucumbers and tomatoes, can seem like an added chore and one that could easily be eliminated, if we just purchased our produce at the local grocery store, along with all of the other items on our list. But sometimes, these everyday chores are the same ones that create an experience and in the process, a lasting memory, for children and parents, alike. If we eliminate these so-called chores, we may be denying ourselves and our children the pleasure of true, quality time spent together.

When you buy your fruits and vegetables from Colchester Neighborhood Farm, consider blocking out an extra 15 minutes or 30 minutes for the “chore” because it could easily turn into a fun and wonderful experience. Colchester Neighborhood Farm is a social enterprise in every sense of the word. Employing adults with developmental and intellectual disabilities who are more than happy to wait on their customers at the farm stand, they are also eager to show off their farm, which includes chickens, a friendly donkey named Dapple, and some goats and their babies…yes the kids love the kids! A visit to Colchester Neighborhood Farm is more than just buying fresh fruits and vegetables, it is an opportunity for our children to learn about agriculture, to see how their food is grown and where it comes from. And going home with a few good memories along with some fresh tomatoes, organically grown cucumbers, and a bouquet of fresh flowers isn’t bad either.

Meal Planning Notes:
Feel free to roast leftover veggies you have in the fridge with the potatoes such as red or green peppers, onions, squash from the farm etc. The recipe will still come out great!! This recipe is just a starting point for your meal planners to get ideas and learn how to roast vegetables. Just make sure all the vegetables you are roasting are the SAME SIZE so they cook at the same time.
Make sure you don’t cook too many potatoes on the same cookie sheet. They need room to breathe. If there are too many they will steam instead of brown up. To solve the problem, use two cookie sheets on separate racks in the oven.

Method:
Boil carrot coins in salted water until fork tender. (about 5-10 minutes depending on thickness of the coins) Drain the carrots when soft.
Heat a skillet over medium/high heat and add the oil and drained carrots. Toss to coat.
Add the brown sugar and spices, stir frequently and allow the sugar to melt and caramelize the carrots.
Serve warm!

**Feel free to double or triple this recipe based on how many people you are feeding.

I’m generally pretty good about resisting impulse purchases at the grocery store , but I just couldn’t get past these Rainbow Crunch Carrots… walked past them a few times, picked them up, put them down a few times,  yes? no?  not organic, not local,  …ah, it’s  winter…, a cold raw, dark winter day… they wound up in the cart… maybe no longer can be considered an impulse?
Anyway, they were beautifully colorful and some were sweet, some not.  There is a recipe on the back which actually is good served hot or cold, and works too as a base to throw other things in like  some dark leafy greens.  Since we prefer our vegetables al dente, I suggest lightly steaming rather than boiling the carrots.  Enjoy! 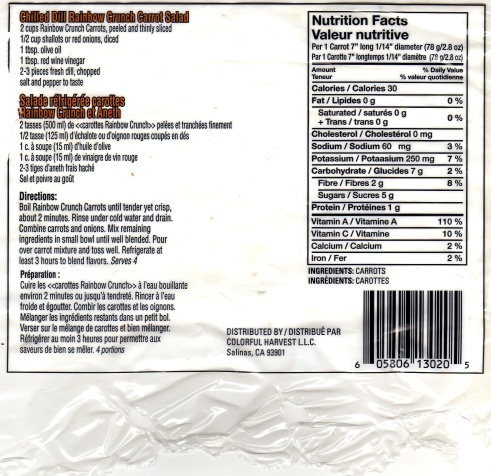 Jerusalem Artichokes, also known as Sun-chokes, are tubers of a type of sunflower, rather than artichokes, as the name suggests.  They aren’t from Jerusalem; they are native to North America.  They were first cultivated by the Native Americans long before the arrival of the Europeans; this extensive cultivation makes the exact native range of the species obscure.  The French explorer Samuel de Champlain found them being grown at Cape Cod in 1605.  The Jerusalem artichoke was titled ‘best soup vegetable’ in the 2002 Nice festival for the heritage of the French cuisine.  (from Wikipedia)

Scrub them and don’t peel them, because the nutrients are just below the surface of the skin.  Jerusalem Artichokes are similar in nutrition and use to potatoes.  They have 650 mg. of potassium per 1 cup (150g) serving.  They are also high in iron, and contain 10-12% of the US RDA of fiber, niacin, thiamine, phosphorus and copper.  Use them in all of the same ways you use potatoes  They are good sliced thin in a stir-fry… you can also mash, boil, bake, gratin, roast, etc…  You can use them raw in a salad but put some lemon or vinegar over them because they oxidize quickly.  They pair particularly well with potatoes.

A favorite way to prepare them is sliced, drizzled with olive oil, salt and pepper, and then roast them in a 400ºF oven for 45 minutes until they are golden brown.  They are surprisingly sweet and kind of nutty-tasting.

Try these recipes from the “Spirit of the Harvest, North American Indian Cooking” shared by CNF member Cherie C.

Place remaining ingredients in a saucepan and bring to a boil.  Pour over slicedJerusalemartichokes and marinate for several hours, refrigerated.  Serve as a condiment or as a salad on a bed of greens.
Serves 6

Scrub Jerusalem artichokes and cook in simmering water for 30-40 minutes, until tender.  Drain and discard cooking liquid.  Peel and mash artichokes and place in a large saucepan.  Stir in chicken broth and green onions.

Simmer for about 15 minutes.  Season to taste with salt and pepper, and serve sprinkled with dill.
Serves 4-6

Wash artichokes and scrub well with a vegetable brush.  Rub with oil and sprinkle lightly with salt.  Broil about 6 inches from the heat for 20-30 minutes, or until easily pierced with a fork.  Serve with meat or fish as a substitute for potatoes.
Serves 6

We’ve planted a lot of beets here at Colchester this year, so here’s a suggestion on how to use them from Chef Carol d’Espinosa.  Thanks again, Chef Carol!

Remove the greens leaving 1″ of green stem on the beet.  (Set greens aside for another use- they can be prepared like most other greens and are excellent sauteed with a little olive oil and garlic)  Wash well in water to remove any dirt.  In a sauce pan, cover the beets with cold water and add a pinch of salt.  Bring to a boil then turn heat to medium and cover.  Check for doneness with a paring knife.   Remove from heat a drain.  Let them cool in the covered pan.  Use gloves to remove the skin and stem under running water since the juice will stain your hands and clothes and lovely but difficult to remove purple.

These can be sliced and eaten warm as a side dish with butter, salt, and pepper.

Mix with 2 Tsp cider vinegar,  and 2 Tsp water with 1 Tsp honey and salt and pepper.  Chill overnight.  Serve the pickled beets cold on a salad.

1 C. Vidalia or other sweet onions

1. Heat the oil and sherry in a medium frying pan over low heat for 3 minutes. Add bacon onion, chives, and garlic. Sauté and stir over medium heat until the onions become translucent. Add carrots, turnips, parsley, and thyme and blend into the onion mixture.

2. Add the broth, cover, and cook 20 minutes, or until the carrots and turnips are tender. Remove the pan from the heat, then add the vinegar, salt, and pepper, and stir into the vegetables. Transfer to a warm dish and serve immediately.

Hope you’ll try these delectable treats!
Call to make an appointment to pick some up!
connie 781-588-4255

Jerusalem Artichokes, also known as Sun chokes are tubers of a type of sunflower, rather than artichokes, as the name suggests. They aren’t from Jerusalem. They are native to North America.
Scrub them and don’t peel them, because the nutrients are just below the surface of the skin.
Jerusalem Artichokes are similar in nutrition and use to potatoes.
Use them in all of the same ways you use potatoes
They are good sliced thin in a stir-fry…
you can also mash, boil, bake, grautin, roast, etc…
You can use them raw in a salad with some lemon or vinegar over them because they oxidize quickly. They pair particularly well with potatoes.
My favorite way is to slice them, drizzled them with olive oil and salt and pepper and roast them in a 400ºF oven for 45 minutes until they are golden brown. They are surprisingly sweet and kind of nutty-tasting.